What Are the Mechanisms of Action for Veterinary Laser Therapy? 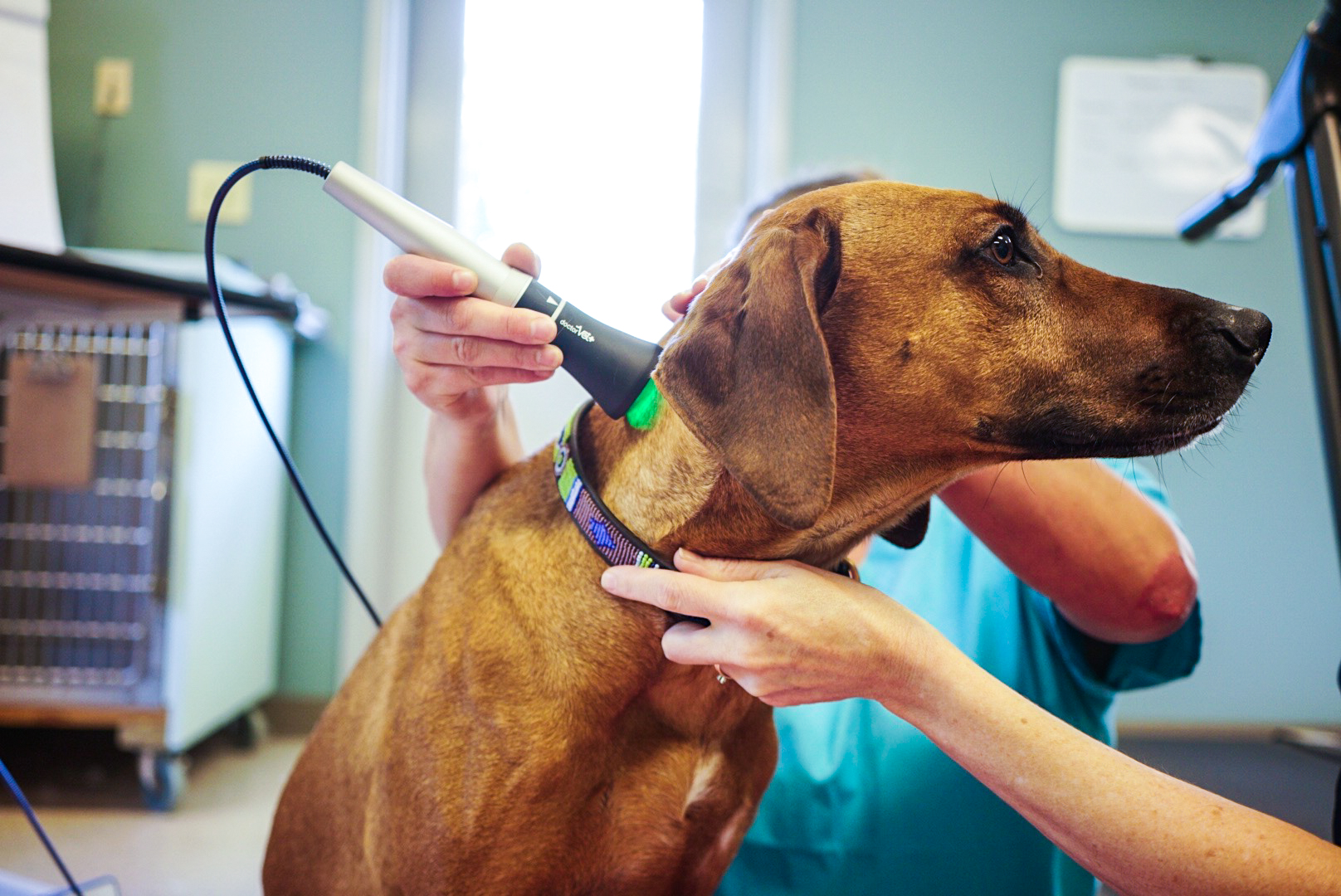 How the Laser Works in the Body (a deeper dive…)

Once blood leaves an artery and works its way to a capillary bed, there are a combination of forces that govern how well it perfuses tissue. Hydrostatic pressure on the arterial side of the bed “pushes” plasma (more accurately, filtrate) out of the capillary and into tissue.  On the venous side of the bed, oncotic pressure then works to “pull” the filtrate back into the capillary. All the while, venous pressure is working to “suck” the blood back to the heart.

These forces are at a virtual equilibrium and so the perfusion rate of tissue is relatively constant, even though it is skewed depending on how far along the capillary bed you are— closer to the artery, the greater the perfusion; closer to the vein, the less the perfusion, since most of the blood is being sucked back to the heart.

This is fairly intuitive, but what may not be, is the fact that venous pressure plays a much bigger role in capillary pressure than does arterial pressure— 5 times more, in fact! This means that even a fractional change in venous pressure can result in a significant change in the tissue perfusion along a capillary bed.

Here is where laser therapy can make a difference: The vast majority of infrared light that enters the body is absorbed by water in the blood and tissues and is converted into heat.

As so, light turns into localized heat changes. This heat change leads to changes in the pressure of fluids that are confined to a relatively fixed volume, such as cells in our tissues and blood in our vessels.

Therefore, when (laser) light is absorbed along the paths of capillaries, we can augment the perfusion pressure, thereby bringing more oxygen-rich blood to tissues and carrying away blood that is filled with carbon dioxide, lactic acid, and other metabolic waste. This effect is mirrored in the lymphatic system, which helps to drain the tissues of excess fluid, preventing edema and toxicity.

Out of the Capillaries and Into the Tissue

In the normal course of events, some of the oxygen from blood is released from the hemoglobin within red blood cells, makes its way into the bloodstream, perfuses through the capillary walls, crosses the cell membrane, and migrates to the mitochondria where it can be processed into energy.

The approximately 200-300 million hemoglobin molecules contained within red blood cells are comprised of four complexes, each capable of holding a molecule of oxygen (O2). Within the hemoglobin, there is an iron core to which the oxygen bonds. This is surrounded by a polypeptide that takes the shape of a pocket. When the local conditions are right, the polypeptide changes shape slightly to “open the pocket” after which the oxygen is released. If one of these four complexes releases its oxygen, the other three will tend to follow in a cascade of oxygen release.

Fortunately, these iron atoms absorb near infrared light with much higher affinity than the surrounding water and proteins. This characteristic can serve as a target for laser therapy.

Similar to water molecules, an iron atom will vibrate more vigorously and heat up when  it absorbs light. This heat is localized within the polypeptide and will cause a change in its conformation (shape), thereby “opening the pocket” and prompting the release of oxygen. Remember: If even one complex within the hemoglobin experiences this change, the trend will be toward full oxygen release.

From there, the oxygen follows its usual path across the cell membrane and into the cell, where it is carried by a series of transport enzymes to the mitochondria.

On the membrane of the mitochondria are a series of enzymes that make up the electron transport chain, aka, the respiratory chain. This metabolic chain terminates at a complex called ATP Synthase, which is what finally synthesizes ATP, the chemical energy our cells use to perform all their metabolic, locomotive, and signaling tasks.

The input for the ATP Synthase “engine” is the oxygen carried by an enzyme called Cytochrome Oxidase. This enzyme has two distinct states: oxidized and reduced. This enzyme cycles back and forth between these two states, retrieving oxygen from the previous enzyme carrier in the chain (oxidizing) and delivering it to ATP Synthase (reducing) this is referred to as a Redox reaction. At its core, the Cytochrome Oxidase complex contains a copper atom, which (like the iron in hemoglobin) will absorb near infrared light with a higher affinity than the surrounding water and proteins.

Light has been shown to cause a bi-lateral, transient state-change to this complex, meaning that if it is oxidized (is holding an oxygen molecule), it will be stimulated to release the oxygen more quickly to ATP Synthase. Similarly, if it is reduced (devoid of oxygen) it is stimulated to “go back” and retrieve another oxygen molecule.

Each time Cytochrome Oxidase completes a full oxidation-reduction cycle, another molecule of ATP is produced. So, incident light will  stimulate faster and hence more of these cycles, thereby increasing the efficiency of ATP production. These cells can then use that energy to do that for which they were designed..

If we combine all of the Step 3s above, we can summarize the effect of laser therapy on the metabolic process of cells:

That was the easy part! We identified a process that virtually all parts of the body have in common and exploited steps along the process that can be predictably targeted using laser. The hard part is characterizing what the wide variety of cells and tissues in the body do when they have more chemical energy available.

This is so hard, in fact, that it’s easy. There is such a variety in cell types, tissue function, local stimuli, and bio-regulators, not to mention in bacteria, viruses, pathological states, and other environmental factors, it is impossible to make any blanket statements about what cells “want to do” with any surplus of energy.

Instead, we “hide” behind the greater truth that the body is a very well-oiled machine and will successfully rid itself of most foreign actors and heal/repair itself from most micro-injuries, whether they be trauma, ischemia, toxicity, inflammation, and even infection. This sounds like a copout of sorts, but an example might help to clarify:

Collagen is a popular keyword today, mostly because of its role in making our skin look beautifully smooth or depressingly old. In the aesthetic world, laser companies love to point out that laser therapy can promote collagen production, and this has been shown to be true. But the other side of that truth is that laser has also been shown to inhibit collagen production. Wait, what…!?

Collagen can provide tensile strength to damaged tissue fibers and therefore help to repair tears in tissue, whether they be skin, muscle tissue or connective tissue such as tendons and ligaments. When tissue  experiences  a tear of some sort, it releases  enzymes that stimulate fibroblasts to secrete  collagen fibers  in an attempt to “self-cauterize” and prevent further tearing of adjacent tissues. However, too much production of  collagen can be a  bad thing that leads to overabundant scar tissue. This  can isolate cells from their blood supply and potentially initiate necrosis.

Laser has been shown to help in both these scenarios, presumably via the regulation of collagen production. Because the same cells can perform  very different (at times even exactly opposite) functions  depending on their chemical and physical environment, a surplus of energy can lead to enhancement in either direction. The body “chooses” which regulatory path to take; laser therapy simply enables this process to function at higher efficiency. This can (and does) manifest itself in stronger repair AND in shorter healing times— i.e. in faster wound closure and in more robust epithelialization with less risk of dehiscence.

There are many more of these enzymatic processes that regulate healthy tissue function, and laser therapy has been shown to help in many of them.

Conversely, laser therapy (in therapeutic doses) has NOT been shown to hinder cellular repair or macroscopic tissue healing. At worst, laser therapy has neither a positive nor negative impact on whatever condition it is treating, which can typically be resolved by correcting the dose prescription, technique, or diagnosis.

Having such a general mechanism, laser therapy can be useful on pretty much any clinical symptoms presented. That said, predictably successful outcomes are more likely to result when we have: An accurate diagnosis of the underlying pathology, appropriate adjunctive therapy (i.e. proper wound preparation, concurrent use of antibiotics, anti-inflammatories, or physical therapy) and a carefully chosen laser protocol that is properly implemented.

For the same reasons, though, laser therapy should not be used to treatauto-immune diseases where the body is fighting against itself or malignanancies. . Remember: The laser won’t choose sides; it will simply enhance a cell’s metabolic efficiency. So if a particular cell’s tendency is to do harm, laser therapy could in fact cause more harm than good.

As you can see, laser therapy can be a powerful tool for promoting cellular health and tissue healing in a wide variety of maladies. Simply allow your imagination to lead you to them!