The Scintillator Question: Gadox vs Cesium

With the steadily increasing number of flat panel digital x-ray detector suppliers in the veterinary space, a lot of the “tech” talk is being watered down into “sales” talk and the true differences in technology are being skewed. With that in mind, this article is dedicated to deciphering one of the principal distinctions in flat panel hardware: scintillator materials. Here we will discuss the details of:

X-Ray absorption
The scintillator layer of a Digital Radiography (DR) flat panel detector is the layer that actually absorbs the x-rays. The two most widely used materials are gadolinium oxysulfide, and cesium iodide (commonly referred to as Gadox and Cesium, respectively).

These materials are designed to be highly absorbent of the x-ray energies used in diagnostic imaging. Basically, x-rays are incident on a layer of scintillator material,

which converts x-ray energy into visible light (usually of green wavelength). The green light that emanates from the scintillator layer is in turn read by an array of photodiodes that converts light energy to electrons. These electrons then activate a layer of amorphous silicon that is imprinted with an array of thin film transistors (TFTs) that make up individual pixels, which capture the electrical signal (electrons) and can be read and processed by a computer to yield an image.

But all of that occurs well after the actual x-ray absorption by the scintillation layer. When the absorption event occurs, image quality comes from what is known as the Signal-to-Noise Ratio (SNR) – basically the number of x-rays absorbed vs. the precision of their being detected.

The primary benefit of Cesium is high sensitivity to the x-ray signal, allowing lower exposure factors to produce an image. This is why Cesium is heavily used in human radiology (especially pediatrics), where the principal concern is the amount of radiation dose delivered to the patient. The sacrifice to this high sensitivity is an increase susceptibility to noise (lower SNR).  With less dose (lower number of x-rays) comes higher uncertainty of the recorded signal (therefore higher noise).

With Gadox, the sensitivity is slightly decreased (less than 10%), but with the additional radiation dose to get the same signal, there is less noise in the signal, resulting in a slightly higher SNR. 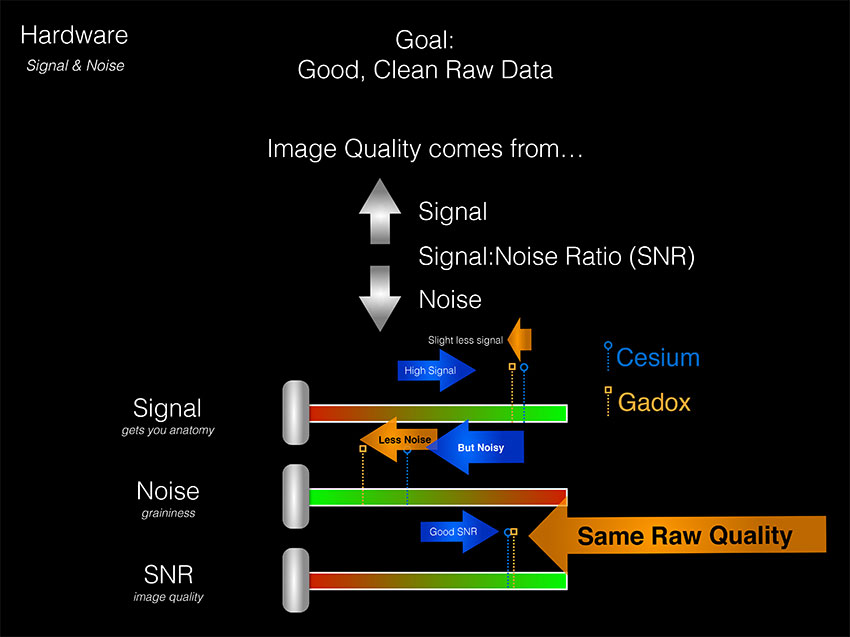 The truth of the matter is that from a strictly hardware perspective, GadOx and Cesium produce very similar image quality, even though they achieve their high Signal-To-Noise ratios in opposite ways. The principal difference is radiation dose, and again we are talking about differences less than 10%.

Implications in radiation dose
But does radiation dose really matter? That is not a rhetorical question, but a real, valid one. The answer is yes for humans, and no for pets. That sounds particularly callous, especially in an industry whose focus is the healthcare of animals. But the truth is that radiation exposure takes many years to manifest into biological effects, and our pets simply don’t live long enough for that to be realized.

In human pediatrics, this is a very important topic because the effects of x-ray dose accumulation throughout a lifetime may result in cancer. And that is why – not for image quality issues as some people claim – Cesium is the scintillator of choice in human radiology.

What about scatter radiation affecting veterinary personnel? Of course we need to protect our staff, and solid training in radiation safety is a crucial factor with any x-ray equipment. But that <10% of dose difference in exposure is not going to make a difference. If you doubt this, please review our article on Radiation Exposure where you’ll see that even being a patient for an x-ray examination (which gives thousands of times more radiation than the scatter from administering one) is hundreds of times less impactful on your lifespan than things like obesity, as well as alcohol and tobacco usage. Back to the technology…

Manufacturing
Another major difference between scintillators is how they are produced. Gadox is usually produced in a “chemical” way whereas Cesium is “grown”. There is obviously plenty of chemistry in both techniques, but Gadox is typically mixed in powder form with a liquid epoxy to a uniform concentration and “poured” into thin sheets where it hardens to form a layer with precise thickness. This is a relatively easy process that has simpler quality controls and lower variation from batch-to-batch and manufacturer-to-manufacturer.

Cesium on the other hand is “sprayed” onto a substrate at a given concentration, then “baked” in an oven causing crystals to form and grow upwards and in parallel. The cool part is that these crystals serve as “light tubes” that increase the efficiency and resolution of the scintillator light leading to the higher sensitivity we spoke of earlier. The issue is that the quality of the end-product depends greatly on the concentration of the initial deposition, the time-temperature profile of the baking process, and the angle of crystal growth (if they grow even slightly diagonally, their efficiency significantly decreases). You can learn more about the variations in batches and in manufacturers in an upcoming “Sometimes Cesium isn’t Cesium” Knowledge Center article.

The take home message of this section is that from a reliable manufacturer, Cesium panels are very effective and reliable technology. From the second-tier manufacturers, however, both quality and consistency of Cesium products is suspect, at best.

Cost
This leads to the “brass tax” conversation. Gadox, being relatively simpler to make and having longer history in the radiography world is typically less expensive and more reliable (across manufacturers), with the tradeoff being slightly lower dose sensitivity. The price of Gadox-employed flat panels is also more consistent across the market because of the lack of variability.

Prices of Cesium-employed flat panels, on the other hand, varies widely across the market, as does the quality of products. From the top-tier manufacturers, Cesium panels are going to cost a little more, but be much more reliable and with increased x-ray sensitivity, will yield the best raw image quality at the lowest dose. Again, from second-tier manufacturers, prices will be lower (on the level of Gadox panels), but with notable inconsistencies among batches and between manufacturers.

Hardware vs Software
Worth reminding, though, is that these are all differences in hardware with only minor variation in panel sensitivity. All of this is very much secondary to the most important step in the acquisition process: Image Processing. The minor pixel-level differences only yield the raw image data, which is virtually useless diagnostically. 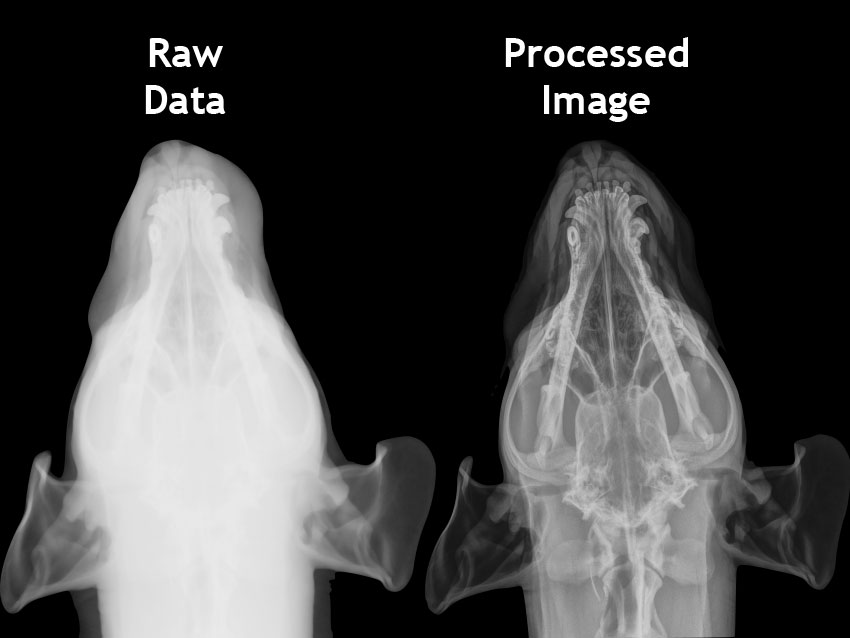