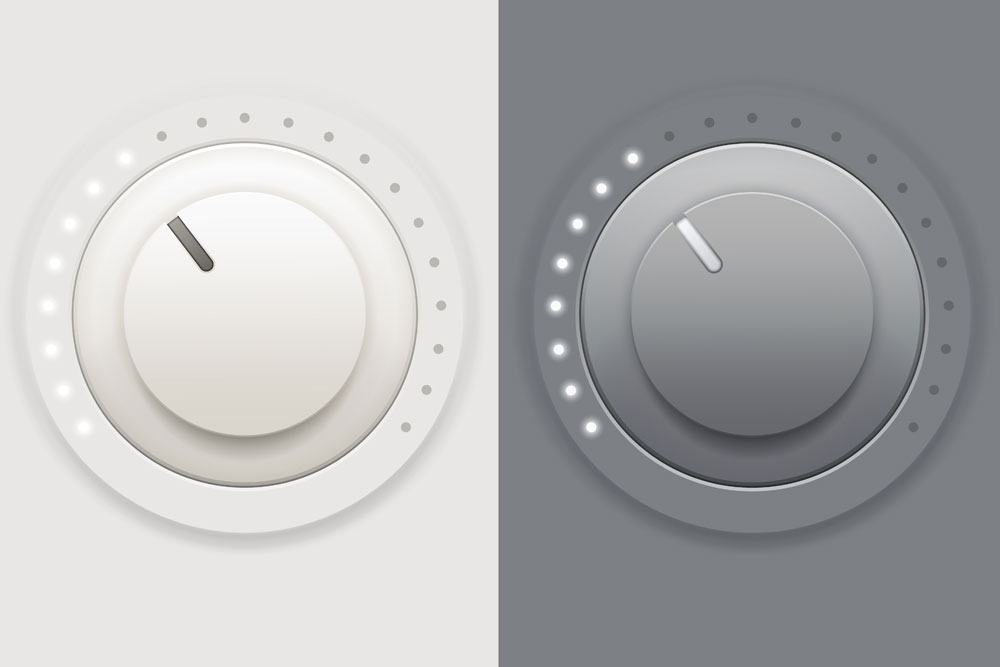 Every Digital Radiography (DR) company provides a technique chart with their panels. These x-ray prescriptions have evolved over time from the days of film and as DR panels have evolved to be more sensitive. Most likely, the DR company has spent a good bit of time testing and optimizing these techniques to provide the best image quality for their panels. But what ARE these knobs (kVp and mAs) and what do they DO to your image quality for a variety of species and sized patients? And what are the implications on patient dose, personnel dose, and panel dose?

X-rays, and How They Are Produced
In simple terms, diagnostic x-rays are produced by accelerating electrons across a large voltage and bombarding them onto a heavy metal target (usually tungsten). The energy of those crashing electrons is converted into a spectrum of x-rays.
This occurs inside an x-ray tube. The familiar “kVp” setting is what controls this high voltage and the resultant energy of the x-rays produced.

The peak value of this large voltage between the cathode and the anode is what we refer to as kVp (kV is kilo Volts and p is for peak). This determines the maximum energy the electrons have when they collide with the anode target, and in turn the maximum energy of x-rays that get produced. So for a 90 kVp tube, the maximum x-ray energy produced is 90 keV (kiloelectron Volts).

But, not all of the x-rays have this peak energy. In fact most of them don’t. The spectrum of the x-rays produced range from 0 to a maximum of whatever the kVp setting is. The average x-ray energy is only about 1/3 to 1/2 of the kVp, including some internal filtration of the really low-energy x-rays. In the end, the kVp setting determines the energy profile of the x-rays, which is really what interests us most.

This energy profile is important because it determines the overall penetration of the x-rays. For the scope of this article, suffice to say that higher energy x-rays are less likely to be absorbed and so penetrate deeper through tissue.

Current (milliAmperes, mA) simply refers to the number of electrons used per time of exposure in this whole process (i.e., the length of time, in milliseconds, that the kVp is on, connecting cathode to anode). The product of current (mA) and exposure time (seconds) is the familiar mAs and translates to the number of x-rays produced per second. For a given exposure time, the mAs (current multiplied by time) provides the quantity of x-rays used during that exposure.

Turning the Knobs: kVp and mAs
So what is it about the radiographic image you are about to take that would make you increase or decrease either of these settings? The answer is size of the patient and the body part of interest (thorax, abdomen, or musculoskeletal system).

In the days of film radiography, detailed technique charts were necessary to produce consistent radiographic exposures from patient to patient and body part to body part. These technique charts dictated incremental changes in kVp based on patient thickness. For example, a change of 2-4 kVp was necessary for each centimeter (cm) in thickness. In addition, the range of kVp used was dependent on the body part of interest. As an example, a thoracic technique would use a relatively high kVp range with a relative low mAs (e.g., 80-110 kVp and 3mAs), necessary to increase conspicuity of the pulmonary blood vessels. Bone radiography was at the other end of the kVp and mAs spectrum (e.g., 50-70 kVp and 10-15 mAs), allowing more of the less energetic x-rays to be absorbed, producing fine bony detail. Abdominal techniques were in the middle ranges for both kVp and mAs.

The take home message is that fairly precise exposure techniques were necessary to produce radiographs of consistent quality. Failure to do so resulted in many retakes, at the cost of inefficient use of time and increased patient and personnel x-ray exposure.

Today’s digital radiology world has completely simplified this process while at the same time producing consistent and superior diagnostic images. In fact, the most modern DR systems, with new more sensitive panels, have consolidated their technique charts to put most of the anatomy options into only two categories: skull/extremities (i.e. the smallest of anatomies surrounded by air) and “everything else”. Then you simply increment the technique slightly as the patient size (usually generalized by weight) increases.

Dose to Patients and Staff
Dose is a tricky thing to calculate without making a lot of assumptions on distance from the x-ray machine to the patient and the detector. But a good rule of thumb is that the patient dose is quadratically proportional to the kVp setting and linearly proportional to the mAs setting. Wait! What!? In English please!! Let’s start with mAs since its quantitative nature should be very intuitive. If you double the number of x-rays used (remember that’s what mAs represents), you double the patient dose. Simple. But for the kVp setting, the dose to the patient increases with the square of kVp: a 20% increase in kVp (say, from 100 to 120 kVp) increases the dose by ~44%.

So while, yes, dose is more sensitive to changes in kVp, the range of kVp used only varies from about 80-120 kVp (~50%), while mAs values change from 2 to upwards of 30 (1500%). A very-first-level check to compare two different techniques used to see which one creates how much more dose is:

Example:
Technique A: 100 kVp @ 5 mAs (typical technique for a large abdomen setting)
Technique B: 89 kVp @ 15 mAs (an example technique from another manufacturer)

DR Panel Sensitivity
DR Panels have evolved over the last 15 years with better scintillators, more efficient electronics, and more advanced image processing. This has resulted in exposure techniques that allow a notable reduction in mAs. Unfortunately, this is not the same for kVp, since you still have to penetrate that same 95 lb Rottweiler hip as you did 15 years ago.

Technique charts also provide a good comparison tool for measuring a manufacturer over time (as their technology advanced) as well as between manufacturers. There are a lot of marketing resources being spent these days on a “low dose” message. But if the x-ray techniques are not changing as a result, then you are not realizing the true benefit of high-sensitivity-lower-dose products.

Conclusion
Kilovoltage potential (kVp) and mAs are familiar to all of us in veterinary medicine, and remain the basis for forming radiographic images. Thankfully, gone are the days of complicated and demanding technique charts. The advent and continued refinement of digital radiography has led to extremely repeatable diagnostic images, produced using less mAs, and concurrently less radiation exposure to patients and personnel.