Slice CT vs. Cone Beam CT: Which Is Best for Your Veterinary Practice? 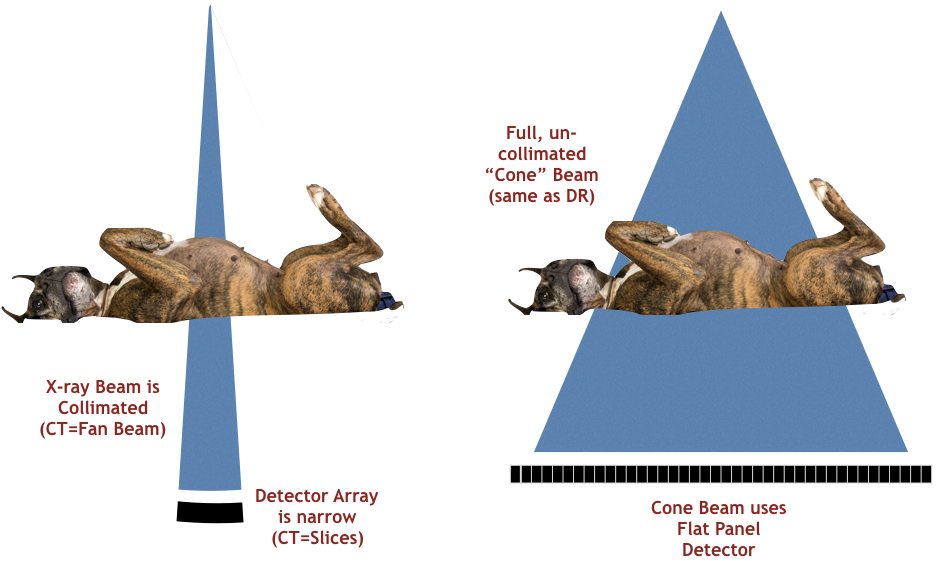 There are three primary reasons veterinarians make the decision to invest in a computed tomography (CT) scanner: to uncover previously un-diagnosed pathologies, to unlock the benefit of interventional treatments, and to improve clinical outcomes. This is an investment into the standard of care and economic success of your clinic.

You may already know that there are two types scanners on the market that produce volumetric image data: slice CT (also called “traditional CT”) and Cone Beam scanners. Each of these technologies has its pros and cons, but the two principal differentiators with respect to image quality and logistics are:

Scanning Logistics Impact the Level of Motion Artifacts
Motion artifacts in CT imaging are the single greatest inhibitor of image quality. This comes into play when the patient moves during a single “acquisition,” or gantry rotation.

Because traditional CT scanners rotate at 30 to 120 rpm (an entire rotation in 0.5 to 2 seconds), the amount of motion artifact is virtually negligible. Also, if there is motion within a given rotation, the artifact appears only in that “slice” of data, which is on the order of 1 to 2 cm thick; the rest of the dataset is unaffected.

With Cone Beam technology, the X-ray tube and detector are bigger and heavier, so the rotation speed is much slower—on the order of 2 to 4 rpm (an entire rotation in 15 to 30 seconds). If there is any motion during this rotation, the entire image (often 14 to 17 cm of anatomy) is impacted in a way that cannot be corrected with image processing without literally manipulating the dataset based on some imprecise assumptions of motion uniformity. So any motion during the scan leads to the need to completely repeat the scan.

Contrast Resolution Caused by Scattered X-rays
Image quality in all X-ray imaging—especially CT—depends strongly on the assumption that the X-ray passes in a straight line from the generator through the anatomy to the detector. Because the reconstruction of a 3-D image depends on a continuously rotating 2-D dataset, if there is any variance from this straight-line assumption, the contrast resolution, i.e. the ability to differentiate tissues of slightly different densities, suffers. This is particularly important in the thorax and abdomen of the patient, where these subtle differences are typically the reason you would choose CT as the imaging modality in the first place.

With traditional CT, both the X-ray beam and the detector array are collimated to a very narrow “slice” of anatomy, so the “straight-line” assumption holds true. Any scattered radiation is not captured by the detector array, and so no errant data is recorded. With Cone Beam technology, though, the X-ray beam and flat panel detector are not collimated, so the scan both a) produces more scattered radiation and b) captures virtually all the scattered X-rays. These are errant data points (originally destined for other pixels) whose acquisition significantly reduces contrast resolution, and therefore diagnostic power. 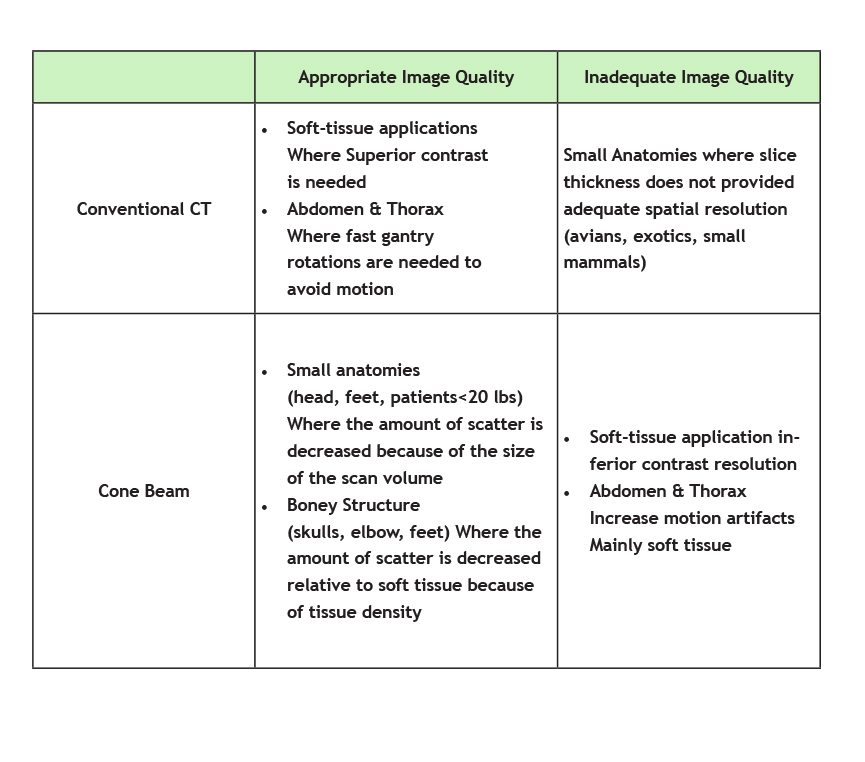 SOUND TOP TIP
Computed Tomography is an advanced imaging modality. There are advanced imaging specialists in your profession: they’re called Boarded Radiologists. DO NOT engage in the purchase of a CT scanner without first contacting your radiologist for their opinions.

Conclusion
Though there are several factors to consider when purchasing a CT scanner, image quality should be right at the top of your list. Traditional CT tends to offer superior image quality because it is less affected by motion artifacts, and its components are collimated to optimize contrast resolution. In your smaller patients, and in the skulls and distal extremities of even some of your larger patients, these factors are often minimized. But in the thorax and abdomen of mid-to-large animals, these are seriously limiting factors of usefulness. Consider this advantage when deciding which CT would be the right fit for your veterinary practice.

If you would like more information about the installation requirements associated with veterinary CT, call SOUND® at 800-268-5354. You can learn more about SOUND®’s CT systems by following these links >>> CereTom® CT  |  BodyTom® CT