Regenerative vs Therapeutic: a Laser is a Laser, right? 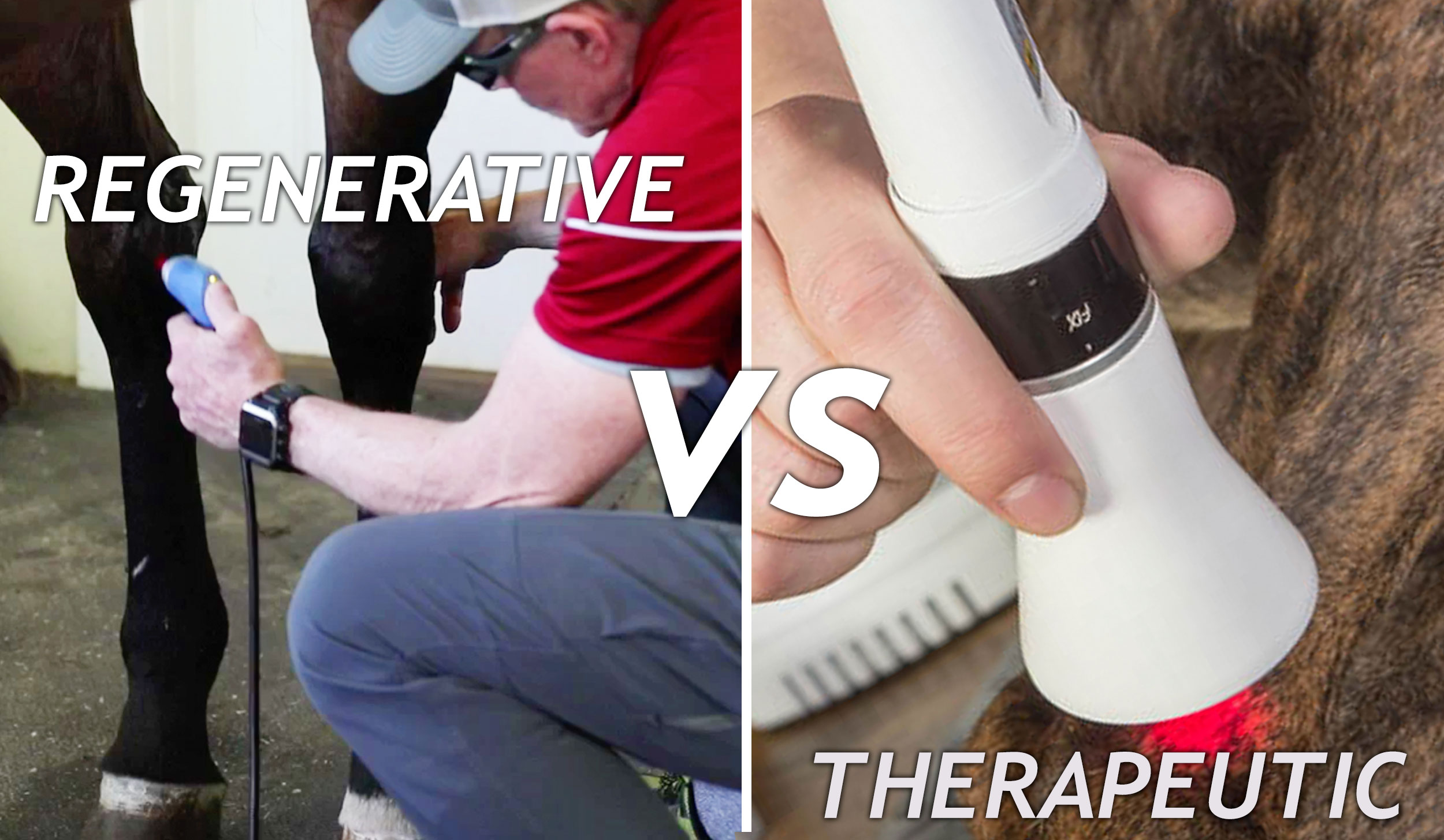 In the equine veterinary market, where the pathologies are deep-seated, recovery times are longer and patients are more expensive, there is a lot of pressure to fix them quicker. Within the laser market there are several claims at quick-fix solutions, but these systems have a wide variety of parameters and mechanisms. In this article we’ll dive into the main differences…

Laser Therapy
In the short form of the story, light, regardless of pulse structure does three main things. First, interacts with the water in the body to create pressure gradients that stimulate capillary bloodflow and enhances perfusion of the blood into tissue.  Second, it interacts with hemoglobin to increase the amount of localized oxygenation of the tissue.  And finally it interacts with the mitochondria of cells to enhance the efficiency at which cells create and use chemical energy.  Combined this leads to a general effect of stimulating the body to function exactly as it does naturally only faster and more efficiently.

This is laser therapy, and is useful on any pathology that would get better naturally if the patient had enough rest, proper nutrition, and enough time. Mostly this includes sprains, strains, bruises, and maybe even some chronic pain syndromes. 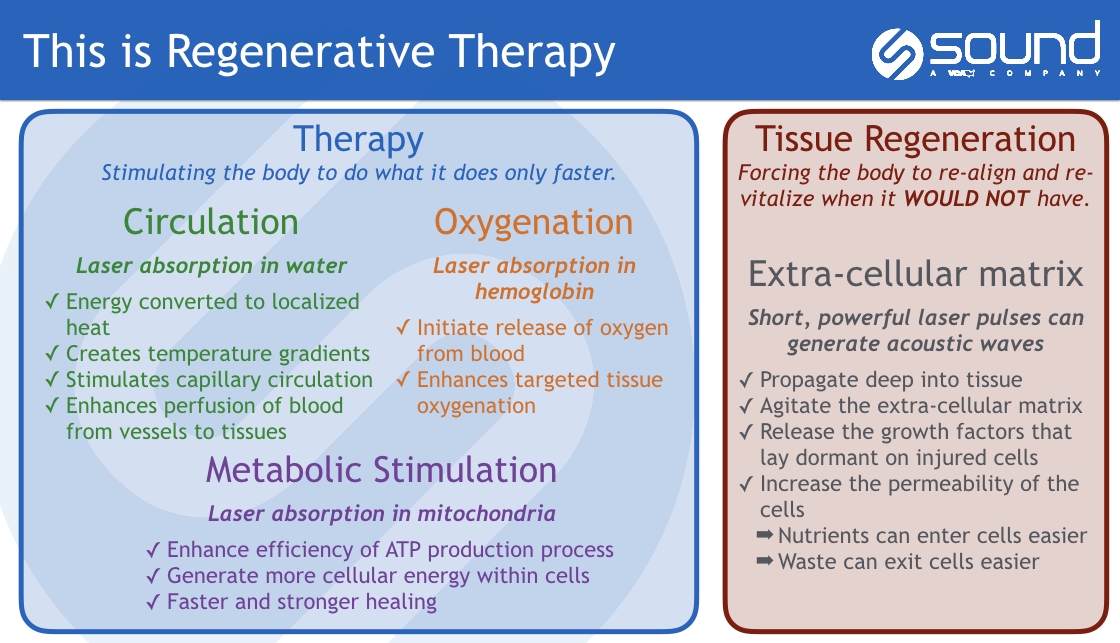 Regenerative Laser Therapy (RLT)
There is however another phenomenon at play and it is related to the structure of a pulse of light. When light is not pulsed or pulsed on a relatively long time scale,  the cells that absorb the light will expand and contract gently. If the pulse is shorter than the thermal relaxation time of the cell though,  then the rapid expansion/contraction will create a shockwave. This is called a photo-acoustic wave since the light induced the sound wave. A special quality about these waves is that they are produced isotropically (in all directions) from the absorption site.

As you know from ultrasound, these waves propagate quite far into the tissue. Much farther than light. In fact, there is a field of imaging called Photo-Acoustic Imaging (PAI) that uses short, low energy pulses to image tissue and even measure oxygenation differences. But just like there is a difference between diagnostic ultrasound and shockwave therapy, these weak pulses are enough to form an image, but not enough to do much therapeutically.

With more energy per pulse BUT still in the structure of a short pulse, there are some very exciting repercussions. The tendon is composed of highly aligned fibers.  And interwoven within this tissue is the extracellular matrix.  Embedded in this matrix are, among other things, growth factors. In healthy tissue, intracellular processes secrete enzymes that initiate the release of these growth factors from the matrix into the tissue, which leads to healthy maintenance as well as repair mechanisms. In damaged tissue, these cells are non-functioning and so they dont produce the chemistry needed to release the growth factors.

And these molecules do not absorb light, so no amount of light therapy is going to get them to release. This leads to long-term scar tissue and hypoxia in a lesion that does not get any better.

But an impactful-enough acoustic wave will modulate the matrix enough to literally shake these growth factors loose. As it does, the growth factors seep in the tissue and initialize the regrowth and repair mechanisms that would have otherwise not occurred.

This is regenerative laser therapy (RLT) technology.  So as you scan the tendon with laser that has very short, but high-energy pulses, you continually create acoustic waves that propagate in all directions throughout the tissue, releasing growth factors as you go. This in contrast to extra-corporeal shockwave therapy which produces the waves outside the body (extra-corporeally) and so when coupled to the skin, only propagate in the forward direction. Instead, with regenerative laser therapy, the light penetrates the tissue, then creates the shockwave from within the tissue that propagates in all directions.

The Clinical Difference
RLT technology broadens the scope of what can be treated to the more severe pathologies, especially in the ligaments and tendons of the equine athlete. Injuries that will naturally cause scar tissue, which over time will compromise the elasticity of the tendon/ligament, can now be nipped in the bud. Since cells can be exposed to growth factors earlier in the healing process (in situations where they wouldn’t otherwise be, either because of necrosis or hypoxia or lack of bloodflow), the conversion of collagen types can be modulated and the subsequent formation of scars can be mitigated.

The Threshold Between the Two
To give some perspective to this arena, you can see in the figure where the “regenerative window” lives with respect to both pulse width and energy per pulse. Remember that to capitalize on photo-acoustic regenerative therapy the pulse needs to be short enough to generate the photo-acoustic wave in the first place, but also contain enough energy to be impactful therapeutically (vs simply diagnostically). 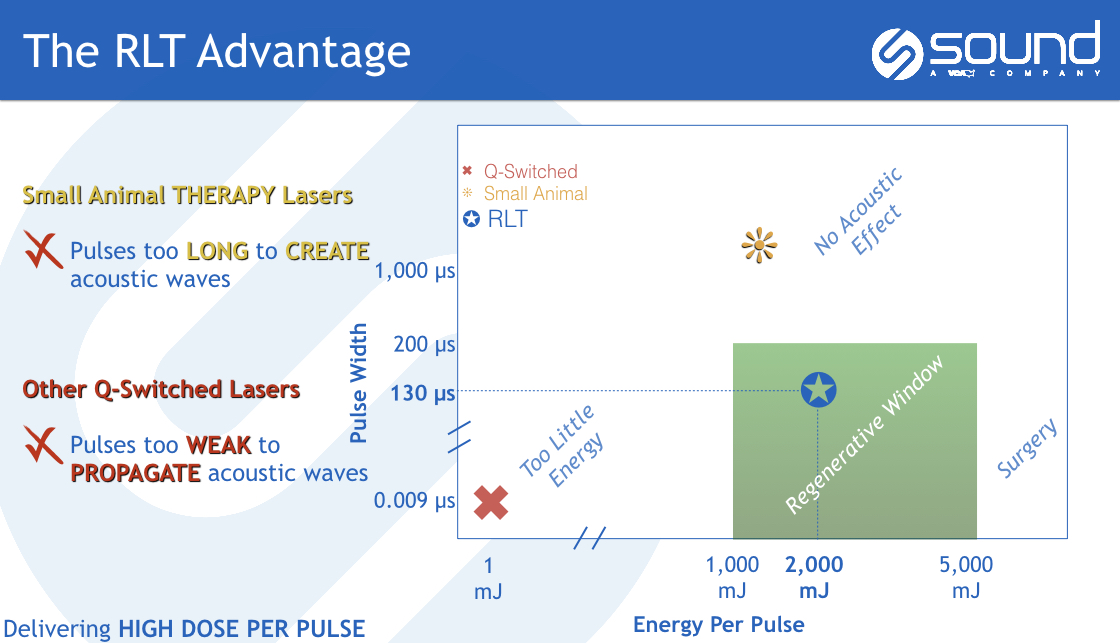 Small animal lasers deliver plenty of energy, but in pulses that are too long to generate the photo-acoustic effect.

Other Q-switched, Nd:YAG lasers have very short pulses, and so produce photo-acoustic waves, but not with enough intensity to be impactful therapeutically.

So again, while light therapy uses light to enhance cellular metabolism and forces the body to perform its natural mechanisms more efficiently,  regenerative laser therapy modulates the extracellular matrix, releasing growth factors, increasing permeability of the cells to receive them, thereby stimulating the tissue to re-align and re-vitalize at times when it would not have naturally.