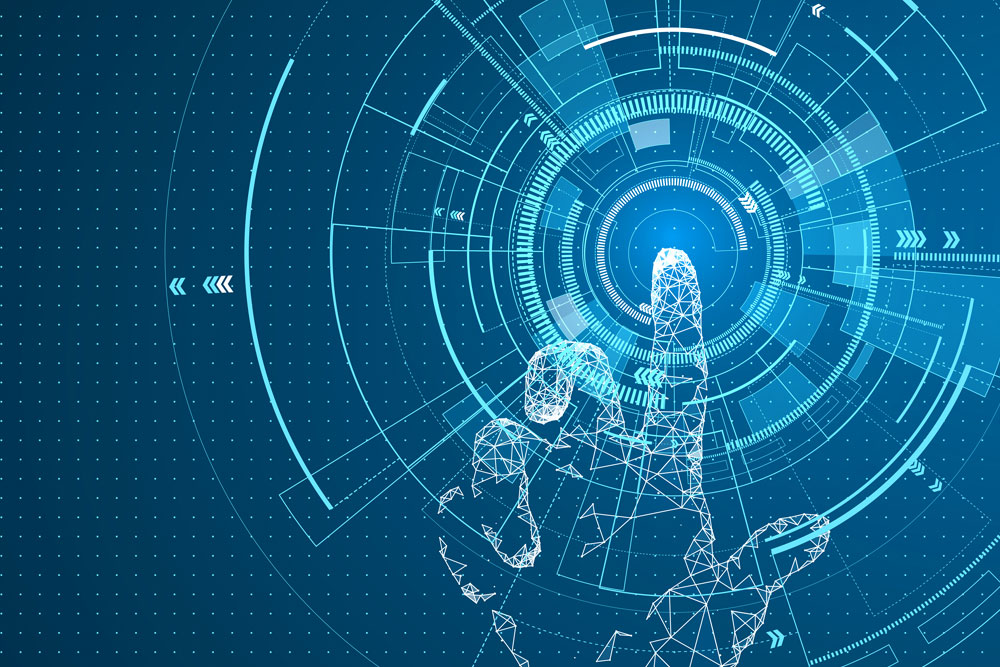 The following is a high-level comparison of x-ray detector systems used in modern digital radiography. All have significant advantages to film radiography, but each produces its image in a different way. Presented are the basic mechanics, as well as the pros and cons of: 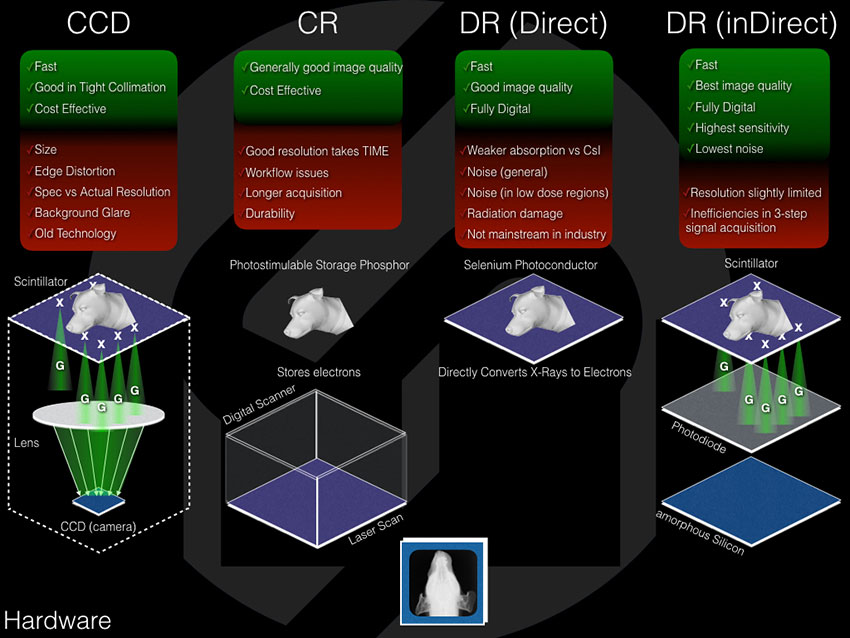 All of digital (non-film) radiography is based on the simple premise that x-ray photons pass from the generator through the patient, and those that are not absorbed by the patient are captured by a detector of some kind, then processed electronically to produce an image. What separates the different technologies is how the x-rays are captured and how they are converted into an electronic signal.

CCD
For Charge-Coupled Device (CCD) systems, x-ray photons are incident on a layer of scintillator material, which converts them into visible (in most cases green) light. This green light that emanates from the scintillator layer is focused by a lens onto a CCD camera, which converts the light to an electrical signal (electrons) that can be read and processed by a computer to yield an image.

An advantage of CCD systems is its speed. The CCD array, much like the ones used in digital cameras, transfers its signal for processing very quickly. Also, in very tight collimation (that is, when the photons pass close to the center of the lens) the image quality is very good. Since it is relatively old technology, the price point of these systems is usually quite affordable. 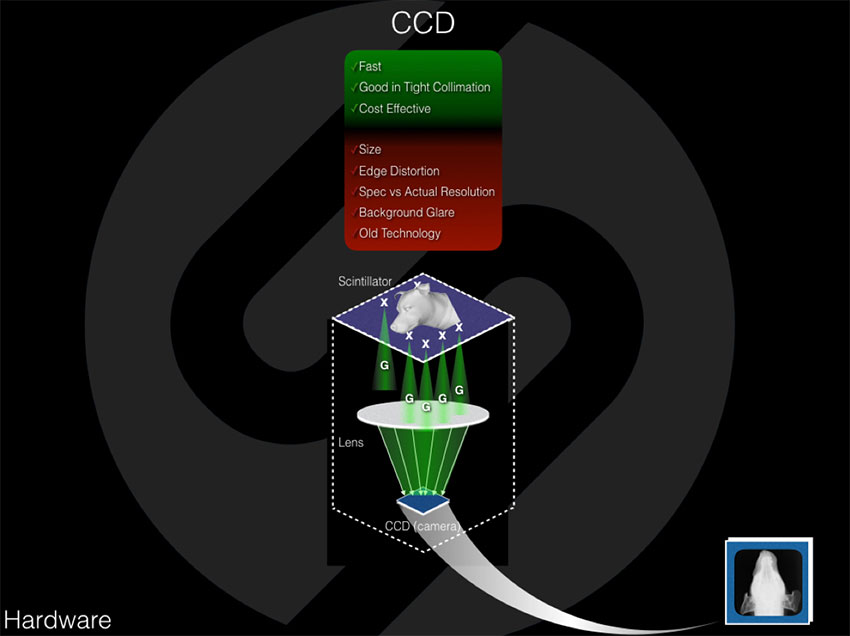 However, there are several disadvantages to CCD systems. Compared to the flat-panel detectors that follow, the form factor (size, shape) of CCD systems is quite large, making them less convenient and not portable. When the collimation is wider so that the light passes closer to the outer edge of the lens, there will be distortion along the edges of the image. This comes from using a spherical lens to focus light onto a flat surface. Another disadvantage of CCD systems results from the need for there to be space between the scintillator layer and the lens, as well as between the lens and the CCD camera. Because the light has room to spread out, the actual resolution ends up being significantly lower than the specified resolution of the CCD system. These separation distances also lead to background glare where light from x-rays that struck the scintillator outside the shadow of the patient get focused on a part of the CCD camera that is inside the shadow of the patient’s image, creating image artifacts along the edge of the anatomy. Finally, as this is older technology, the various components (scintillator, lens, and the CCD camera) are manufactured and supported by many different companies, making servicing these systems both difficult and costly. CCD systems have rapidly fallen out of market in favor of the more dose-efficient and portable DR systems, but the principal CCD manufacturers that are still available in the veterinary space are Hudson Digital, Sedecal/VetRay, ClearVet, and Naomi with an average price of $20K ($40K with an x-ray table).

The bottom line is that CCD technology is becoming antiquated when compared with newer indirect and direct digital flat panel radiography systems.

CR
With Computed Radiography (CR) systems, x-rays are incident on a layer of material with photo-stimulable storage phosphors, which converts them into stored electrons. To get an image, the cassette that contains this material is placed into a digital scanner where a laser beam scans the entire exposed area.  As the laser beam passes through a region of the material, the stored electrons are released and read by a computer, which then processes the signal into an image. 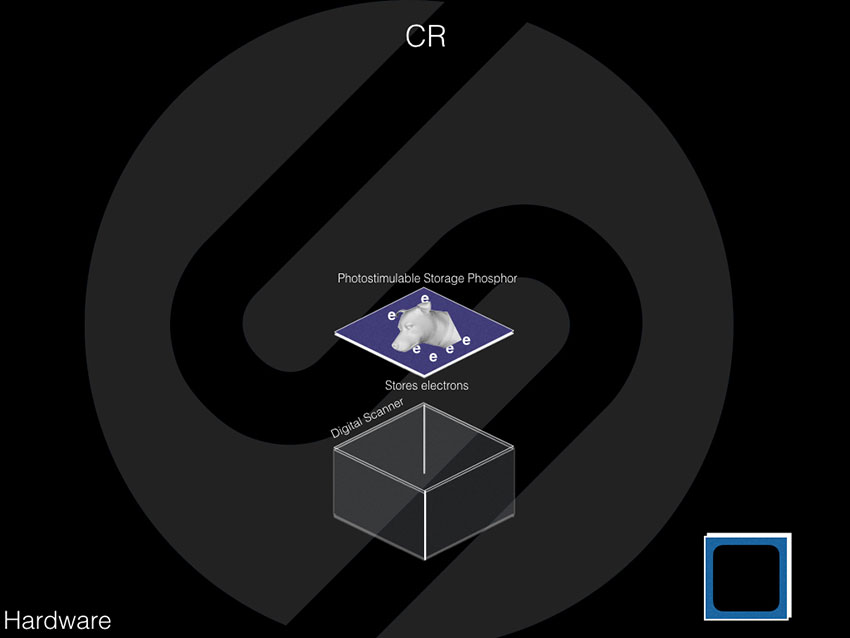 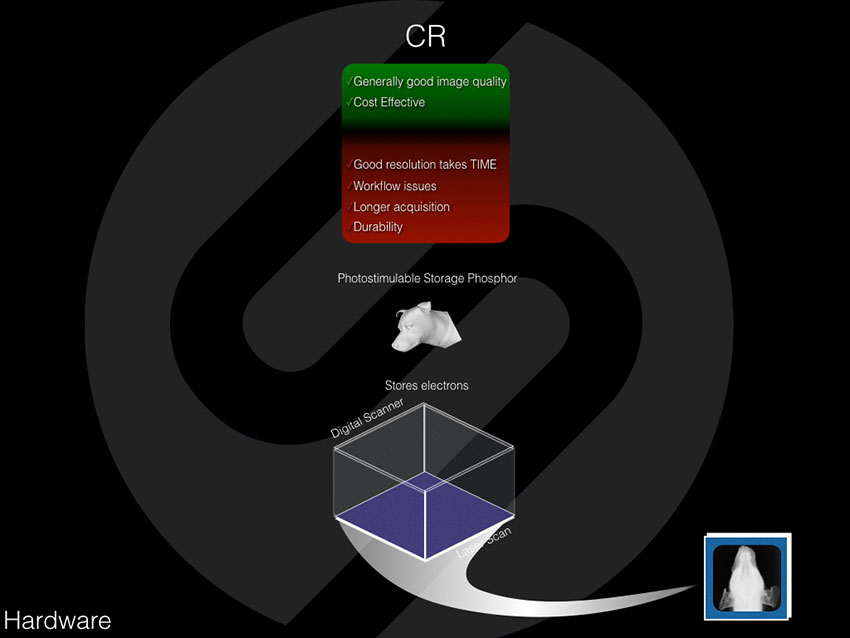 An advantage of CR systems is the image quality, which is generally comparable to the other digital modalities. CR is typically priced on the lower end of the modern digital radiography system spectrum, and is an excellent quality system for the cost.

There are however several disadvantages of CR systems. The two-step image acquisition process (first exposing the patient, then carrying the cassette to the scanner to be acquired) is reminiscent of film based radiography. It eliminates the potential to take multiple views sequentially and presents a significant workflow inconvenience for the radiography staff. Also, the resolution achieved is dependent on the speed of the scanner. The faster the scanner progresses through the cassette; the more blur appears in the final image. So, while current models have increased their acquisition speed, they still fall well behind the digital flat panel detectors to follow. The principal manufacturers of CR systems that are still available in the veterinary space are AGFA, Fuji, FireCR, ScanX and Konika/Minolta with an average price of $10-20K.

Direct DR
With “Direct” DR detectors, x-rays are incident on a photoconductor layer (usually Selenium), which directlyconverts them into electrons that are subsequently processed by a computer into an image; there is no scintillation layer.

Advantages of direct DR systems (compared to CCD and CR) are the speed of acquisition, image quality, and overall convenience. 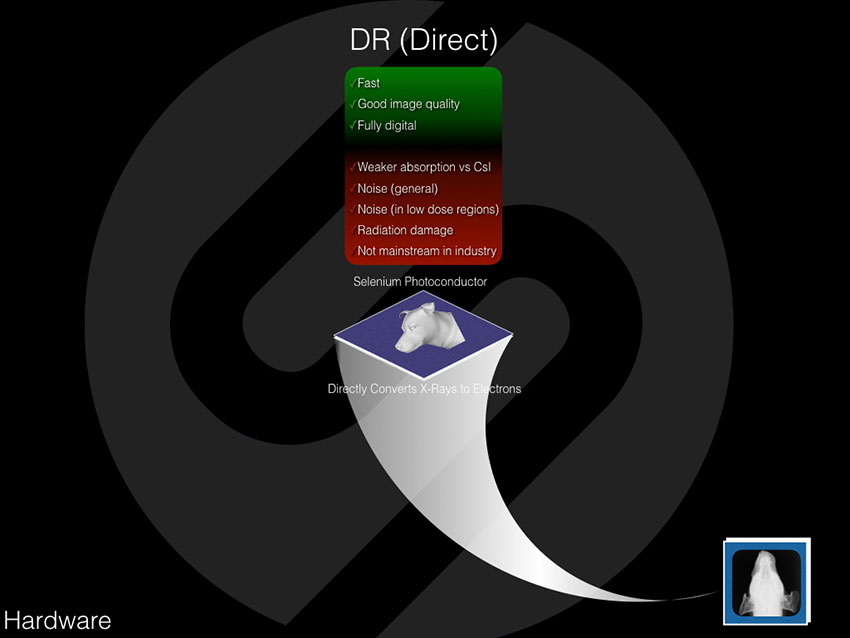 However, there are several disadvantages to direct DR systems. The photoconductors do not absorb x-rays as efficiently as scintillators. This means that for a given exposure dose of x-rays, the acquired signal is lower, the noise is proportionally higher, and therefore the image quality (which is directly related to the signal-to-noise ratio) is diminished. This effect is especially present in the low-dose areas (thick anatomy) therefore limiting the overall functionality of the system. To compensate, the x-ray exposure technique (either amount or energy of x-rays) must be increased. This increase has two fairly significant implications: First, the radiation exposure to the animal, as well as to the staff (from scatter), is increased. Second, since the electronics are closer to the exposed surface of the detector, radiation exposure to these electronics is higher and therefore radiation damage to the electronics is more likely, and the lifetime of the panel may be diminished.  For these reasons, this technology is not very popular in the human or industrial imaging industries. The distributors of direct DR systems in the veterinary space is IDEXX and Patterson. The average price for these systems is $40K.

Indirect DR
With “Indirect” DR systems, x-rays are incident on a layer of scintillator material, which converts them into visible (in most cases green) light. The light that emanates from the scintillator layer is read by an array of photodiodes that converts them to electrons. These electrons then activate a layer of amorphous silicon that is imprinted with an array of thin film transistors (TFTs) that make up individual pixels, which capture the electrical signal (electrons) and can be read and processed by a computer to yield an image. The tern “Indirect” comes from the use of the scintillation layer.

Indirect DR systems are the gold standard of medical imaging because of their combination of speed, high x-ray sensitivity, and low noise that lead to excellent image quality in a compact, completely digital design. If there are pitfalls to these systems, one would be the slight resolution limit due to the potential lateral spread of the light and electrons in the sub-millimeter thickness of the detector. Also, since each conversion step (from x-rays to light and from light to electrons) has less than 100% efficiency, the overall conversion efficiency is less than direct DR. To combat these issues, manufacturers have improved materials and construction over the years, minimizing these factors to virtually negligible levels. The principal manufacturers of indirect DR systems that are available in the veterinary space are Varex, Canon, Rayence, PerkinElmer, Samsung, Fuji, Vivex, and Toshiba, with prices ranging from $25-$40K.

Software vs. Hardware
The single most important aspect of image quality is image processing. And the single greatest advantage of SOUND’s Digital Radiography is the implementation of the MUSICA Image Processing Software. MUSICA ensures the highest image quality across all the contrast layers of an image as well as consistency across all species, x-ray techniques, and users.

To learn more about these benefits, ask your DR specialist about MUSICA.