How Does Veterinary Ultrasound Work? 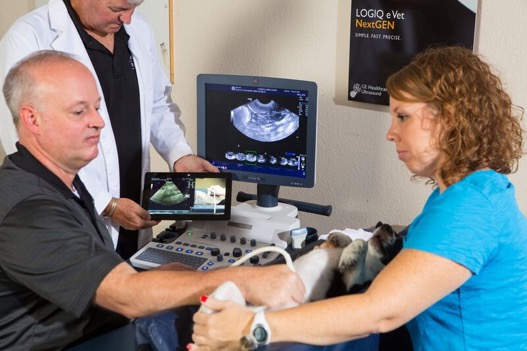 4 FAQs answered about This Fast-Growing Modality

Ultrasound is the second most popular imaging modality in veterinary medicine. Multiple clinical studies have proven that ultrasonography has clear advantages over radiography when diagnosing abdominal organ pathology, non-abdominal soft-tissue conditions, fluid build-up, heart disease, and countless others. Ultrasound is also used in non-diagnostic applications such as safely guiding needles for cystocentesis and cytology and tissue samples.

The following FAQs will introduce you to the basics of ultrasound and how it can be useful when training new nurses and clinicians:

1. How Does Ultrasound Work?

Every ultrasound system has a CPU (computer, central processing unit), which acts as the brain of the machine. The CPU transmits electrical currents to the transducer (probe), which contains multiple piezoelectric crystals.

These crystals change shape rapidly and vibrate when exposed to an electric current. These vibrations produce sound waves, which travel into the animal’s body.

The sound waves interact with tissues and eventually hit boundaries between tissues – such as the interface between the liver and gallbladder, bone and soft tissue, or between fluid and soft tissue. Some of the sound waves echo back to the transducer while others travel farther until they reach another boundary and get reflected back.

When the reflected sound waves reach the transducer, the same piezoelectric crystals that created the outgoing wave are similarly stimulated as they absorb the reflected wave, and when they are, they emit electrical currents, which are transmitted to the CPU to form an image.

The CPU calculates the intensity of the echoes (which determines the brightness or darkness of the images) and the distance between the boundaries (e.g. soft tissue, bone, fluid), thus determining depth information. These intensities and distances are displayed on the screen in a two-dimensional image.

2. Why Are There Different Types of Transducers (Probes)?

Transducers, often called probes, are available in varying sizes and shapes for different applications. Different probes offer varying fields of view and sound wave frequencies, which determine how deep the sound waves penetrate and the detail of images, termed resolution.

Most probes are designed to move across the surface of an animal’s body. The shapes offer different “fields of view” which are best suited for certain applications or imaging specific organs.

The two most common probes used in veterinary ultrasound are micro-convex and linear array transducers. Some specialized transducers are designed to enter openings in the body, such as the esophagus and rectum, to get closer to specific organs. These are more common in large animal reproductive ultrasound and in human medicine.

3. When Does an Animal Need an Ultrasound?

Ultrasound enables DVMs to see inside an animal’s body without the risks associated with other imaging modalities. Although in human medicine ultrasound is primarily used for pregnancy diagnosis, it has many, many other uses in veterinary medicine.

The following are common indications why a DVM would administer an ultrasound exam:

4. Why Do Animals Have to Be Shaved Before Ultrasound?

Ultrasound does not travel through air. Hair traps air and disrupts sound waves which affects the clarity of ultrasound images. Shaving the animal and using a gel-coupling medium improves contact between the patient’s skin and the ultrasound probe, which enhances the quality of images.

Remember, ultrasound must travel into and out of the patient in the most efficient way possible to produce the most diagnostic image possible!