DR Flat Panels – Which Side is Up? 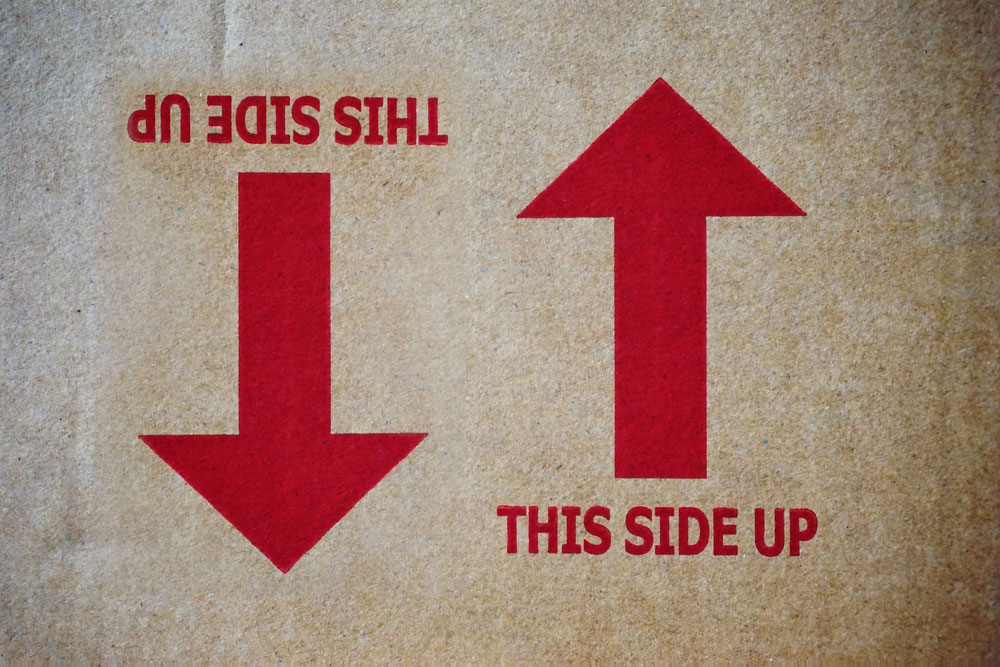 Within the subset of indirect DR systems there has been a very recent split in fundamental architecture. Fujifilm has brought a major change to the market with their Irradiation-Side Sampling (ISS) architecture. Here we will discuss the fundamental differences as it pertains to:

Scintillator Placement
As discussed in previous articles, there are two important layers in flat panel detectors. The first is the scintillator layer. This absorbs x-rays and converts them into light. Scintillators are made of gadolinium oxysulfide (Gadox) or cesium iodide (CsI).

In order to understand which method results in better x-ray absorption, let’s review the chain of events that leads to the radiographic image.

When an image is acquired, any x-rays not absorbed by the patient are absorbed within the scintillator, converting the absorbed x-rays into light. This light is then projected onto the pixels of the detector layer. As the light travels through the scintillator, it spreads and decays slightly in intensity, inherently degrading the image to some extent.

As a result, the signal will be stronger and better resolved if the detector layer is as close as possible to the absorption event. For perspective, these layers are on the order of 600 microns thick (0.6 mm). So, in general, these are minor effects. 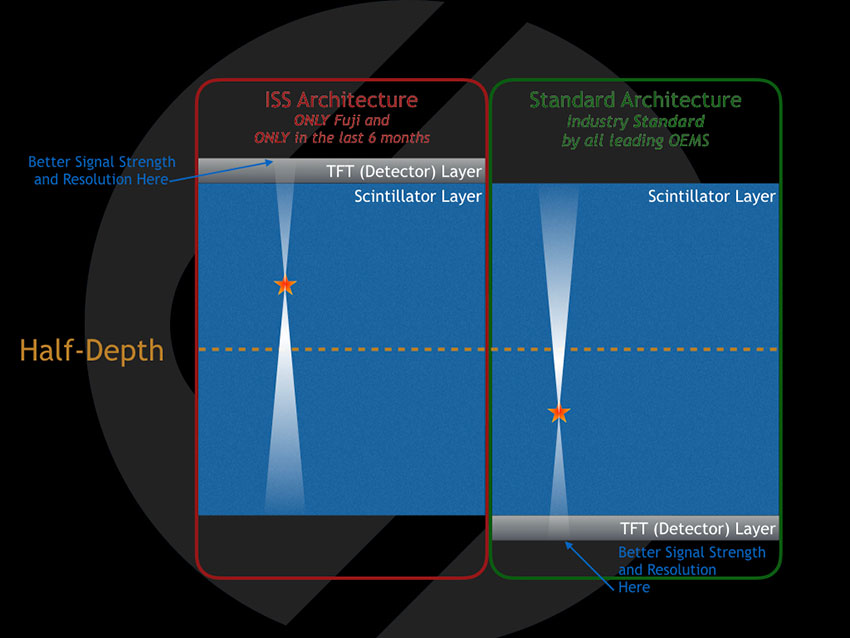 If the x-ray is absorbed closer to the front-side (meaning in the top half-thickness of the scintillator), the image quality will be marginally better with a front-placed detector layer.

If the x-ray is absorbed closer to the back-side (the bottom half-thickness of the scintillator), the image quality will be marginally better with a back-placed detector layer.

If the x-ray is absorbed in the middle of the scintillator, then there is no benefit to either a front-placed or back-placed detector layer.

X-Ray Absorption Location
This brings us to the million-dollar question: Where are the x-rays ACTUALLY absorbed?

Well it turns out that the probability of an absorption event increases the deeper into the scintillator it goes. In other words, the x-ray is most likely to be absorbed in the back-side (bottom half) of the scintillator. 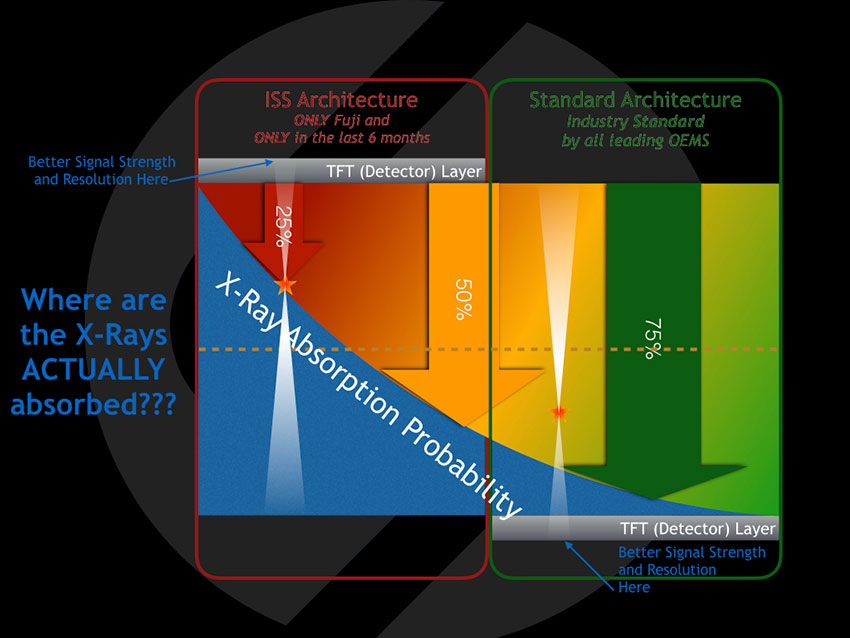 Therefore, since more x-rays are absorbed in the bottom half of the scintillator, the best signal quality is measured with a back-placed detector layer.

Artifacts
One last minor point is that when the detector layer is placed on the front side of the panel, the x-rays have to pass through the detector layer, which contain electronics, on their way to get absorbed. This will result in (minor) signal loss and affect image quality.

Hardware vs Software
These hardware differences do not come from any technological or manufacturing advances, they are just different ways of doing the same thing. As such, they account for only minor differences in panel sensitivity. Flat panel detectors in our industry are, as a whole, very sensitive.

All of this is secondary to the most important step in the acquisition process: Image Processing. The minor pixel-level differences only yield the raw image data, which is virtually useless diagnostically. 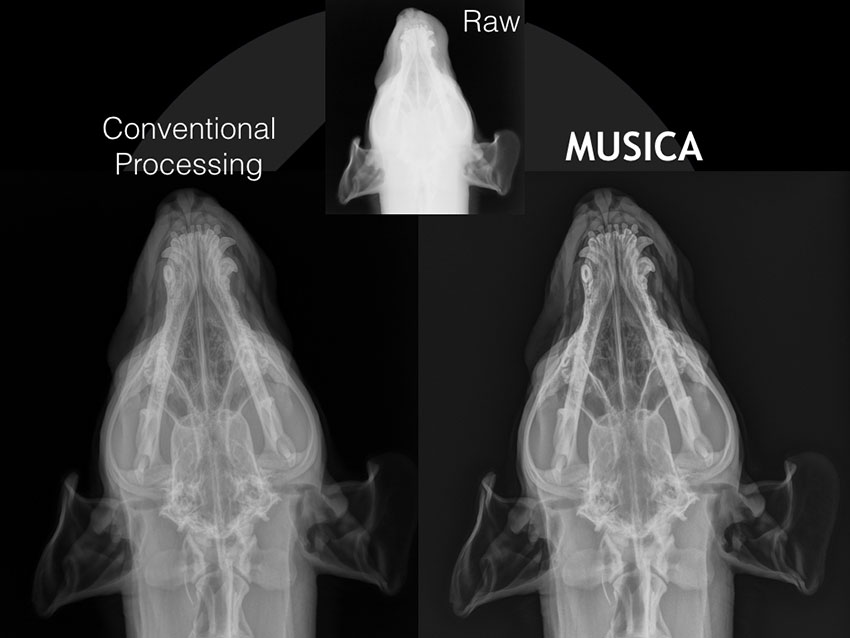 The single most important aspect of image quality is image processing. And the single greatest advantage of SOUND’s Digital Radiography is the implementation of the MUSICA Image Processing Software. MUSICA ensures the highest image quality across all the contrast layers of an image as well as consistency across all species, x-ray techniques, and users.

To learn more about these benefits, ask your DR specialist about MUSICA.